The Jaffa Theatre is a dynamic creative partnership between people, cultures, and languages. Inspired by both tradition and modernity, Arabic and Hebrew speaking artists write, direct, and act. The theatre, located in the heart of the old mixed city of Jaffa, is in one of the liveliest areas of Tel Aviv-Yaffo. The theatre was founded in 1998 and located in a historic building by the sea. It shares its premises with the Arab Al Saraya Theatre company. The two companies work independently and jointly. Productions are in Hebrew and Arabic, and in some cases with English subtitles.

Producing a New Reality
The Jaffa Theatre is a socially involved fringe establishment whose plays often confront pressing issues and conflicts. Following each show, actors and directors hold a dialogue with the audience. The theatre has regularly held festivals dedicated to children, women, and the diversity of Middle Eastern cultures.
Performances occur both in Jaffa and countrywide, in major cities and peripheral centers, as well as abroad. The theatre offers several other cultural projects, including workshops, educational programs, art exhibitions, music, and literary evenings.

Testimonies
“… the only sane Island in the Israeli theatre, where a deep dialogue takes place between two cultures: Jewish and Arabic. This is not a hypocritical attempt to prove co-existence but a real intention to give an equal stage to both cultures.”
Ofira Henig, Leading Theatre Director

“A part of the Arab-Hebrew Theatre’s distinctiveness is the way the audience takes an active part in some of the plays…I witnessed a small miracle of the kind you can only find in a real fringe theatre.” Time Out, Tel Aviv

“….. Jaffa Theatre – A Stage for Arab Hebrew Culture is an institution that insists on going its own unique way… finding materials that promote sensitive reflection and not militancy…..The captivating air of innocence is the key to the special charm of this small theatre in Jaffa, where the surrounding cruel reality is set aside for a moment and is replaced by a kind of gentle dream of reconciled and vibrant co-existence.”
Shai Bar Yaacov, Theatre Critic, Yediot Aharonot 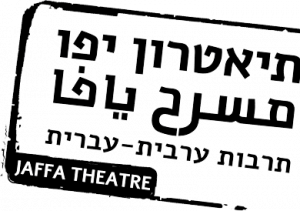